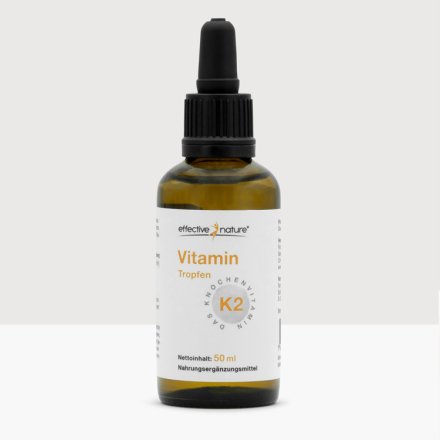 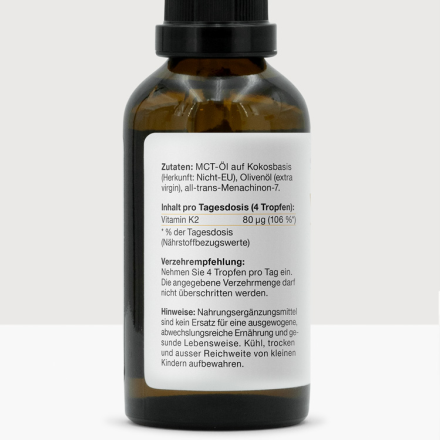 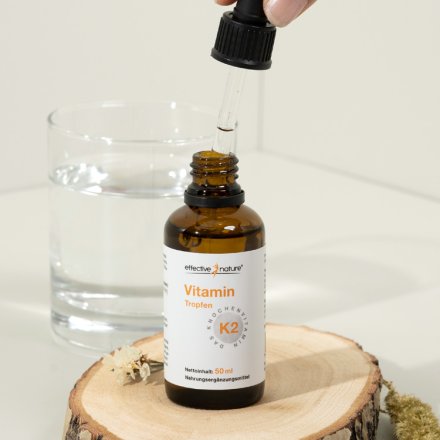 What are the vitamin K2 drops from effective nature?

By the income of this Vitamin K2 oil the daily need at the important Vitamin K can be covered problem-free. Owing to the use of first-class MCT oil (closely.: medium-chained trigylcerides - German: mittelkettige Triglyceride) on Kokosbasis as carrier oil no further additives are necessary. What is particularly remarkable about these drops: they are both odorless and tasteless. The drops contain the vitamin important for the bone structure in its active form known as menaquinone-7.

What is the purpose of our vitamin K2 drops?

The vitamin K2 drops are taken daily to cover the vitamin K requirement. For the body, this vitamin is important above all because it contributes both to maintaining normal bones and to the normal function of blood clotting.

How are the vitamin drops dosed?

You should take 4 drops of vitamin K2 oil per day. Do not exceed the recommended dosage.

What is special about these vitamin K2 drops?

Just like pomegranate seed oil, effective nature's vitamin K2 oil contains the active, so-called all-trans form of the vitamin (also known as menaquinone-7), which is extremely effective in contrast to the cis form. Furthermore, this MCT oil has a neutral taste and smell.

Why is vitamin K2 so important for us?

Vitamin K2 has two main functions in the human body. On the one hand, it supports the normal function of blood coagulation; on the other hand, vitamin K2 works closely with the sun vitamin vitamin Vitamin D - because both are significantly involved in the maintenance of normal bones.

The natural occurrence of vitamin K in food

Vitamin K is mainly found in green foods, especially in kale and chives. The fat-soluble vitamin K is also contained in oils, such as grape seed oil. Often a form of vitamin K is found in plants as so-called phyllochinone, as vitamin K1 is also called. The special form of the vitamin, the K1 form (phylloquinone), is found primarily in plant products - the particularly active form, however, which is also contained in these drops, and which is known as menaquinone-7, is found much less frequently in foods. To mention here would be here above all fermented food, because Vitamin K2 is produced by the bacteria involved in the fermentation.

With the large selection of vitamin products available, you may also ask yourself the question of which one is best for you. In the case of vitamin K preparations, you should clearly prefer vitamin K2. This has two important reasons: On the one hand, vitamin K2 is very rarely found in our food. On the other hand, it can be absorbed and used by our body much better than the other forms of the vitamin K group. When buying a product containing menaquinone, the only thing to be considered is that it is the so-called all-trans form of MK7. Other variants of menaquinone are less active.

People who are taking anticoagulant medication are not allowed to take this preparation, or only in consultation with their doctor.