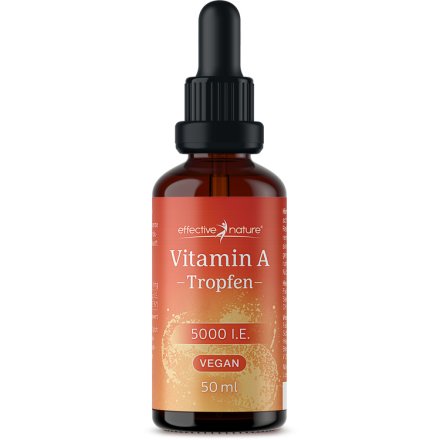 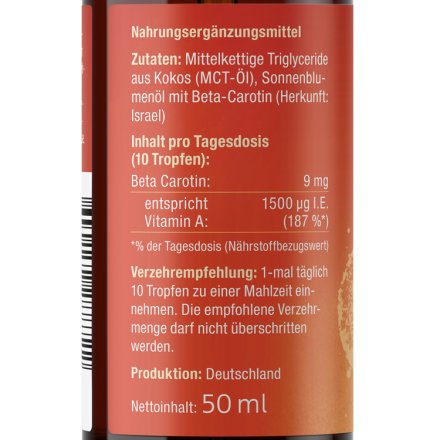 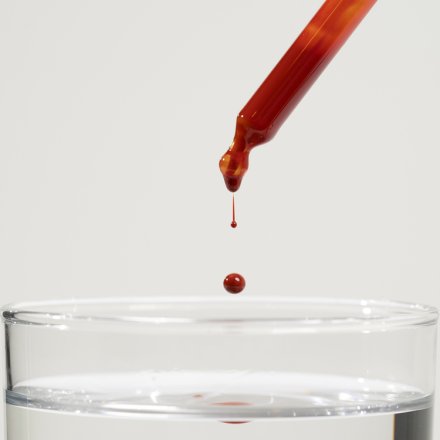 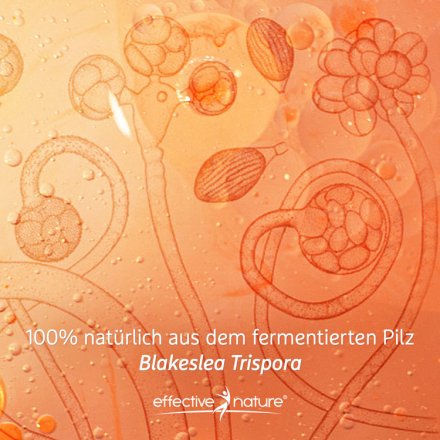 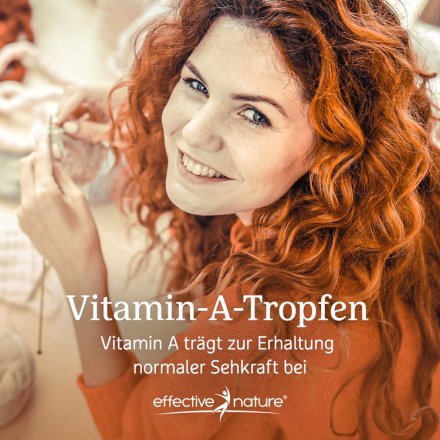 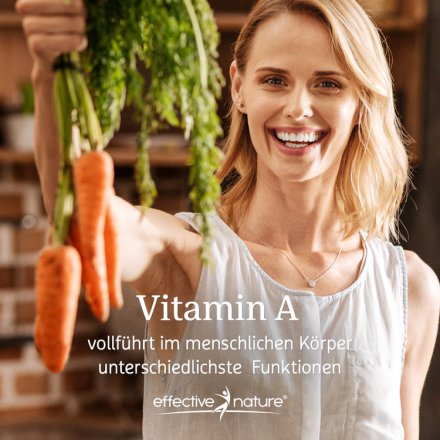 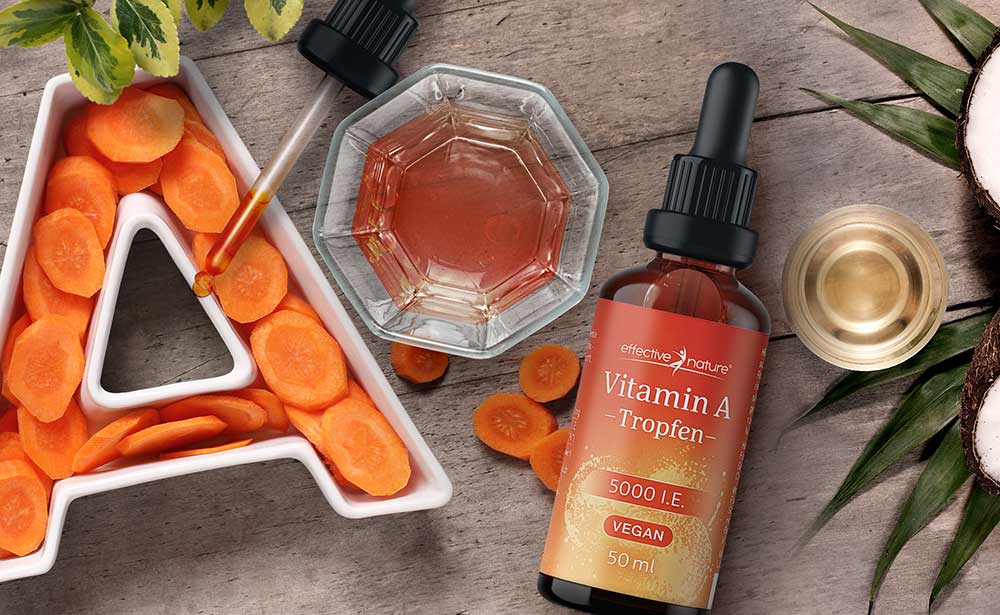 Vitamin A or its precursor, the well-known beta-carotene, is known to many people as "the eye vitamin". No wonder, retinol (the scientific name of vitamin A) plays an important role in maintaining normal vision! Vitamin A is found exclusively in animal products (especially liver, but also butter, egg yolk, and milk), while beta-carotene, which the body converts into vitamin A, is found in plant foods. These new vitamin A drops from effective nature provide you with 9 mg of beta-carotene per daily dose, which is equivalent to 1500 μg of vitamin A, or 5000 international units (I.U.). Thus, you cover 187% of the daily requirement of vitamin A with only 10 drops.

The advantage of taking beta-carotene is that the body converts only those amounts of the substance into vitamin A that it really needs - an overdose of vitamin A, which is normally only slowly broken down, can therefore not take place. The active ingredient, which performs numerous tasks in the body, is obtained in these drops from effective nature through a special process in which it is extracted from the fermented mushroom Blakeslea Trispora. By the way: After the organism has converted the required amount of vitamin A, the excess beta-carotene is stored in the skin tissue.

Vitamin A - the "eye vitamin" that can do much more 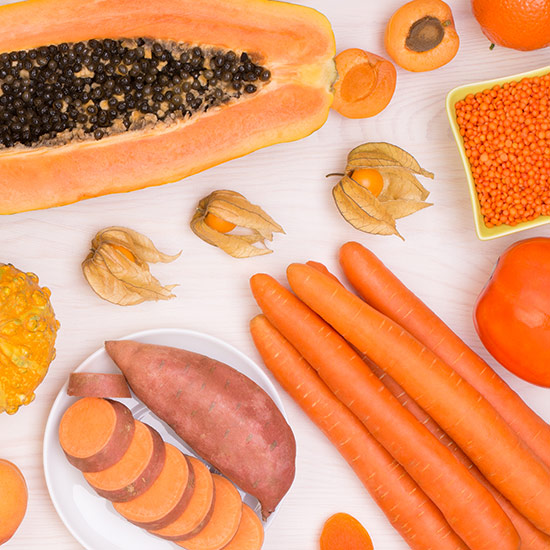 Vegan vitamin A from the mushroom Blakeslea Trispora
Vitamin A itself can only be obtained from animal sources, such as the liver. Of plant origin, on the other hand, is always provitamin A, also known as beta-carotene. For the vitamin A drops from effective nature, an innovative extraction process was used - the active ingredient here comes from the fermented mushroom Blakeslea Trispora. Thus, these drops are purely vegan. 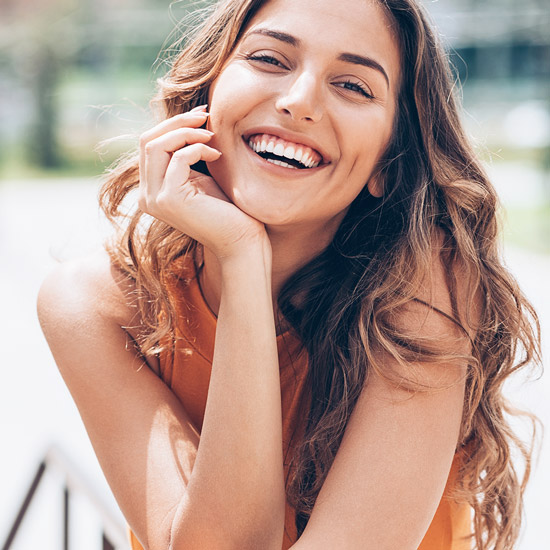 Vitamin A for your skin appearance* as well as for immune support
Among the many tasks - and benefits - of vitamin A is helping to maintain normal skin. But that's not all: the vitamin also plays a role in normal immune system function, normal iron metabolism, and the maintenance of normal mucous membranes. 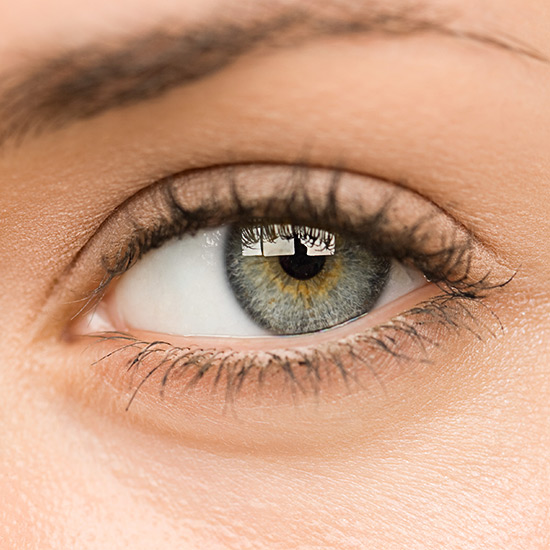 Vitamin A for the maintenance of normal vision
Each nutrient - no matter how versatile and universal - is usually associated with a very specific task for which it is responsible. What the immune system is to vitamin C, our vision and proper eye function is to vitamin A - which is why it is commonly referred to as the eye vitamin.

Recommended use vitamin A drops

Take 10 drops of vitamin A once a day with a meal. The recommended intake must not be exceeded.

Customer evaluation for "Vitamin A Drops"
4.9 /5

Take 10 drops once a day with a meal. The recommended intake must not be exceeded.

For nutritive supply with pro-vitamin A. Not suitable for smokers.