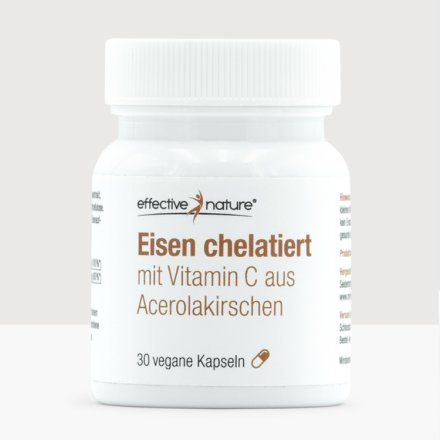 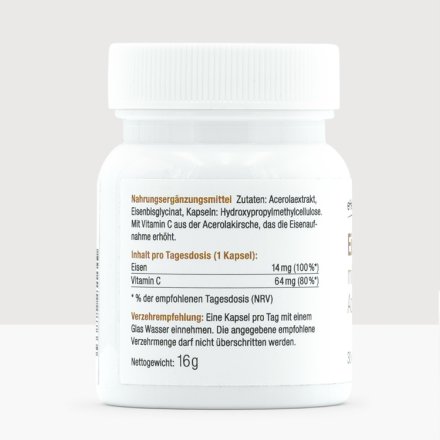 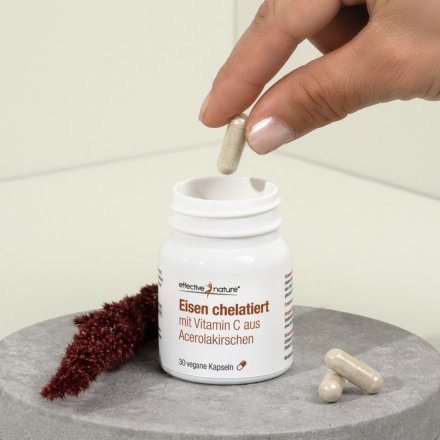 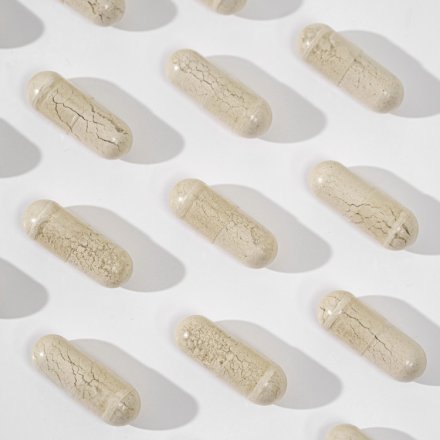 The perfect combination to supply the body with 100% of the recommended daily requirement of iron: Iron chelated capsules + vitamin C contain iron bisglycinate, an organic form of iron that is particularly well utilised by the body. Together with natural vitamin C from the acerola cherry, Iron Chelated Capsules + Vitamin C are perfectly suited for a high-quality supply of iron. The purely vegan capsules contain only iron bisglycinate and acerola powder, are made of vegetable cellulose and do not contain any additives or separating agents - it couldn't be more natural. Chelated iron for better absorption
Iron is chelated to form iron bisglycinate, an organic compound that the body can utilise better than conventional iron compounds. Iron chelated is nothing other than the trace element iron, which is bound to two molecules of the amino acid L-glycine and thus becomes iron bisglycinate. This makes chelated iron an organic compound that is particularly well absorbed, utilised and stored by the body. Of all iron compounds, iron bisglycinate is the one with the highest bioavailability. In addition, iron from non-animal sources is trivalent iron, which is normally less well absorbed by the body than trivalent, animal iron. Iron is the most common trace element found in the body. Most people probably associate iron with blood formation. But iron also plays an important role in the transport of oxygen and the immune system's ability to defend itself. At the same time, the trace element is certainly one of the micronutrients for which a deficiency is often found. Iron deficiency can be caused, among other things, by the fact that iron from animal sources can be better utilised than iron from plant sources. But iron absorption, i.e. the body's ability to absorb and utilise iron, also varies from person to person. Iron has a variety of essential tasks in the body: For blood formation
Iron contributes to the normal formation of red blood cells and haemoglobin. For your immune system
Both nutrients play a role in supporting normal immune function. For blood formation
Iron contributes to the normal formation of red blood cells and haemoglobin.

Take one capsule per day with a glass of water. Do not exceed the recommended intake.